Once in a while people ask how many people are using VyOS on AWS. Since AWS sends us usage reports, this is something we can find out.

Note that this is about the AMI we distribute through the marketplace, we know nothing about instances people deploy from community AMIs.

Anyway, on May the 29th, there were 418 users of the marketplace AMI who ran 466 active instances (roughly 1.1 instance per user).

The most popular instance type is, unsurprisingly, the free tier eligible t2.micro (202 instances). It is followed by 100 m3.medium, 54 t2.small, 48 t2.medium, and 13 c4.large instances. The remaining larger 49 instances include various large and xlarge ones, including some m4.4xlarge and c3.8xlarge (I sure would like to hear from those people about their use cases!). 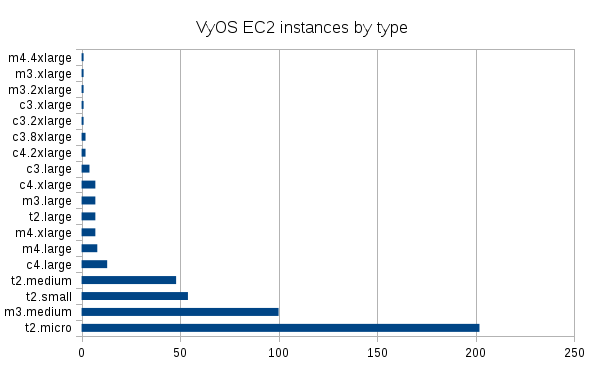 Conclusion? What conclusion? I'm not sure if 418 users on AWS is a failure or an achievement. Maybe when we make images for other cloud platforms, we'll have something to compare it with.