Hi everyone! It's time for the spring update.

As of the current nightly builds, Perl code makes up the minority of the VyOS codebase and all frontend services have been rewritten in the new Python + XML format. This time we used sloccount to properly measure significant lines of code instead of a quick homemade script. It appears as though the codebase is shrinking in size, which can be attributed to the comparative brevity of Python over Perl. 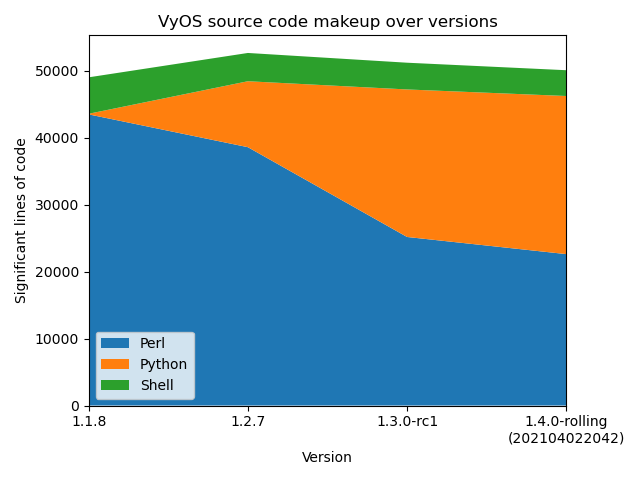 In other words, VyOS CLI is continuously extended to accommodate new features. The smoketest infrastructure is speedily growing and could use more hands right now. (We welcome your contributions as always!) There's a new library for executing op mode commands and querying config values from op mode to help writing new op mode commands. IPv6 support is further spreading through the remaining network services. IS-IS support is more or less settled. We're switching away from using curl for file transfers to native Python libraries such as Paramiko. A much requested feature, VRF support for dynamic routing protocols has landed. In addition, L2VPN/EVPN support arrived recently. Check out Christian's in-depth write-up on it!

We expect to release a stable 1.3 version soon. It had a feature freeze a couple months ago and we've been working on final touches to trim off any remaining irregularities. As such, changes since the January update have been bugfixes and cleanups, for the most part, with occasional backports, such as the IS-IS support.

You can go grab a monthly snapshot or a nightly release for your preferred platform and try it right away.

In case you missed it, VyOS 1.2.7 came out recently. It's a big update that comes with a whole batch of bugfixes and features backported. Go check it out!
Two points from the release post deserve to be reiterated here:

Work is continuing on ARM64 builds to make VyOS on Raspberry Pi a viable option for routers. In addition, we are working on a roadmap for supporting containerized third-party applications in the long-term.